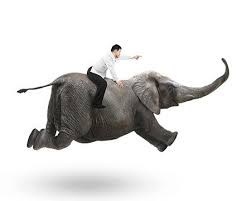 If you’re anything like me, then you sometimes do things that you later regret.

These regrettable actions keep you stuck.

It’s almost as if there are two sides inside of you, raging war on each other. Your sensible side versus your emotional side. What you want versus what you do.

A psychologist named Jonathan Haidt came up with a mental model that explains exactly why you do things that you wish you hadn’t – and how to take control to finally do the actions necessary to get what you really want.

“The image I came up with for myself, as I marveled at my weakness [of willpower], was that I was a rider on the back of an elephant. I’m holding the reins in my hands, and by pulling one way or the other I can tell the elephant to turn, to stop, or to go. I can direct things, but only when the elephant doesn’t have desires of his own. When the elephant really wants to do something, I’m no match for him,” explained Haidt in his book, The Happiness Hypothesis.

Human decision making is like a tiny rider on a massive elephant. The rider may think he’s in charge, but the elephant’s will always wins. The Elephant, The Rider, and The Path are a great framework for understanding yourself and what drives you. All human change depends on it.

The Rider: is your rational and analytical side. The Rider is a visionary that has the ability to think long-term, to plan, and that is willing to make short-term sacrifices for long-term payoffs. The Rider loves to contemplate and analyze, has limited reserves of strength, suffers from paralysis by analysis, and relentlessly focuses on problems rather than solutions. Most crucially, the Rider is so small compared to the six-ton Elephant that anytime they disagree about which direction to go, the Rider will lose.

The Elephant: is made up of your emotions and instincts. The Elephant prefers the comfort and security of a well-trodden path, even if a new path leads to a better outcome – this is why it’s so difficult to change your habits. The Elephant has enormous strengths: love and compassion and sympathy and loyalty. The Elephant is the one who gets things done.

There are three steps to lasting change:

Change begins with a plan, and it’s the Rider who comes up with plans. Direct your Rider to analyze what’s right, on what works. When you’ve lost weight and made progress towards your fitness goals in the past what worked for you? Focus on these bright spots rather than on potential problems related to your desired change. Once you’ve come up with a plan, move on. It’s important to move quickly and to avoid getting bogged down with paralysis by analysis.

In order for the plans of your Rider to succeed, your Elephant must feel emotionally invested in the outcome. Find an emotional connection that you feel deep down in relation to the goal. Don’t just think about why you want to achieve your goal – feel why you need to achieve your goal.

Make change easy. Reduce obstacles in your life, so that the new desired behavior is frictionless. Move the barriers between you and the actions that you want to take. Lay out your workout clothes the night before. Spend time in the morning to prep all of your healthy daily meals. Get a trainer to hold you accountable to showing up to your workouts.

The key to effective change is getting the Elephant and the Rider moving together on a smooth path to success. Do this and you’ll stop doing things that you later regret.

Keep on keep'n on!